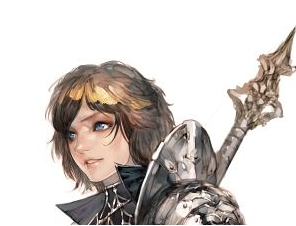 I spent the day trying to track down this famous Korvosan. What a wild goose chase that ended up being! The only compensation for the chase was finding out her name, Amelia Orisini; a name I’m quite familiar with. I don’t remember the person as much, only that she’s a tad bit older than me and would’ve spent more time with my sister Ryah. Another famous daughter of Korvosa in Sandpoint indeed. I don’t think she’s here incognito like I am, but I can’t imagine what she’d be doing here. Judging by all of the running around I had to do to find her I doubt she knows what’s she’s doing here, it’s as if her whims rule her every move! I gave up after the trail grew cold at the Pixie’s Kitten, as I was stopped by the Madame there who said she doesn’t betray the confidentiality of her patrons. As I certainly wasn’t about to pay for services just to be allowed in, I decided I would wait her out here at the Rusty Dragon.

It’s certainly more rowdy here than at the White Deer. I’ve gotten a few more odd looks here, though more of the lecherous nature. One drunken sod had the nerve to put his hands on me and loudly ask if I was an angel because “my ass had to be heavenly." Before I could retort Ameiko thankfully stepped in and gracefully advised he was barking up the wrong tree, much to his embarrassment as the rest of the establishment roared with laughter. She apologized for regular’s behavior, Belas I think she called him, as he normally not so…handsy. She paid for my meal and brought me a little dessert, saying that “I looked like I should be celebrating something today," smiled, and walked off. Either she’s a mind reader or maybe I’m not as incognito as I think I am . . .

Today’s the day of the festival! Most of the preparations and duties with Belor have been completed, so after my initial patrol he suggested I take in the festival and relax. Normally I would advise on a diligent stance, there honestly hasn’t been anything of worthwhile note to warrant any concern. I’ve given him my recommendations on the gates and the overall defensiveness of the town, but I suspect I’ve only told him something he already knows and with the absence of an impending threat, there really isn’t any cause for extra concern. This isn’t Lastwall, there are no enemies at our gates here.

With that happy thought in mind, I think I’ll try my hand at some of the games. I hear the blacksmith is offering a grand prize –a masterwork Earth Breaker! I’ve grown fond of the one I have “on loan”, but one to truly call my own is rather tempting. If the Inheritor will’s it, perhaps it will be mine when I test my strength. I can hardly hold in my excitement!

It is mine! Truly and fairly! It took a while and a few trips back, but I was able to muster enough strength and dexterity to hit the mark perfectly! There were some worthy challengers to be sure, but the Goddess was with me today so none could stand in my way! I must ask Garridan later in regards to its name, seeing as he was its previous owner. I will write more on the rest of the festivities and the strange individuals I’ve met later tonight, but first I need to finish my bowl of curry before the Temple Consecration Ceremony starts.