After their adventure in the catacombs below Sandpoint, the adventurers prepare to launch an all out attack on Thistletop. They commission Das Korvut to prepare some of his finest armor and make other purchases in town. During their preparations, the annual harvest festival takes place. Amelia buys a set of wooden puppets during the celebration, while Astrid participates in the festivities. Lea patrols the streets, noting that even during the party there is a sense of unease lingering over the city. Residents are quietly fortifying their houses, and people check their surroundings every time a dog barks. Marcus’ arms business is booming, and he hires on a young dwarven warrior named Duli to help guard his cart. Practicing the ranseur with Astrid, Marcus turns his old quarterstaff over to Shayliss to serve as protection while he’s out of town. Despite the heightened sense of alert, there is little call for Zavian’s clerical services that week.

As they are making final preparations for departure, Shalelu returns to the town and quickly makes a beeline for the Rusty Dragon, where she has a long private chat with Ameiko. Afterwards, the elven ranger thanks the adventurers for rescuing her friend and thwarting the evil that lurked within the town walls. Shalelu describes her own findings out in the wilderness: the planned attack on Sandpoint will include not only the five local tribes, but even goblins as far away as the Fogscar Mountains.

She’s learned that the ringleaders are based on Thistletop and she had returned to alert the party and seek their aid in tracking down a goblin with information on the island fort, it seems the party is far ahead of her on that score. The elf offers to either accompany them on the attack, or stay behind to keep a watchful eye on town. The adventurers ultimately invite her to join them, recognizing that they will need a tracker to guide them through the Nettlewood to Thistletop.

They take their horses and Marcus’ wagon north along the Lost Coast Way. They chat with Shalelu a bit about city vs. country life, in which she and Zavian disagree. Shalelu explains that while she patrols around the Sandpoint area and considers it the closest thing to home these days, she ranges much farther across Varisia, including to her hometown of Crying Leaf in the Mierani Forest. Lea asks if she visits Korvosan territory, but she says she avoids it so as not to cross the Shoanti.

As they proceed north, Shalelu points out the paupers’ graves, a site that tends to attract ghouls. When Lea asks how to prevent this, she explains that the ground not only needs to be hallowed, but also regularly guarded. 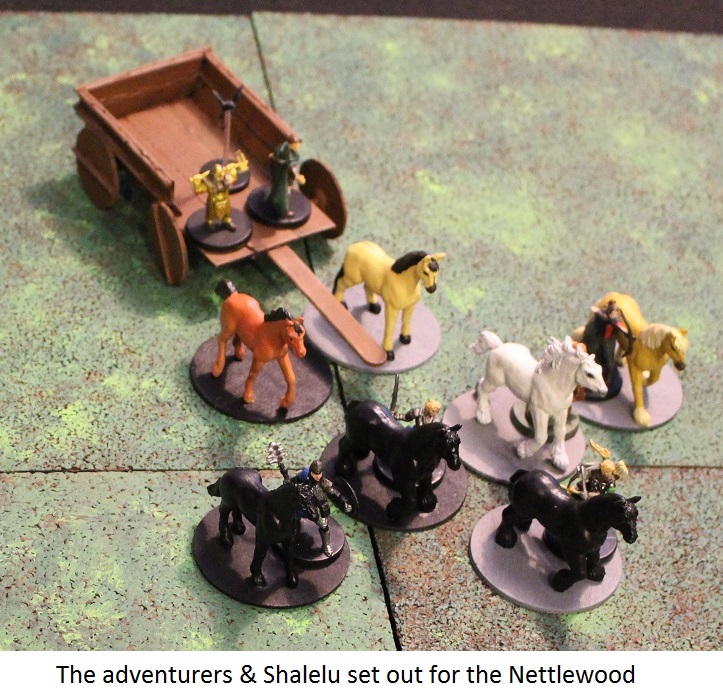 They arrive at the Nettlewood, which is tangled with briars. They leave the wagon and the horses with Duli and enter on foot. Shalelu leads them through the forest, searching for goblin footpaths, a process that takes several hours. Zavian and Lea stumble into a goblinberry bush, but suffer no ill-effects beyond some aches in their joints. The elf finally leads them to a goblin nest inside a huge thicket of briars that rise to treetop height.

The party discusses whether to approach the fort on Thistletop via the bridge on the other side of the nest, or by sailing out to the island. The decide to clear out the goblin warren first and then investigate the sea approach. 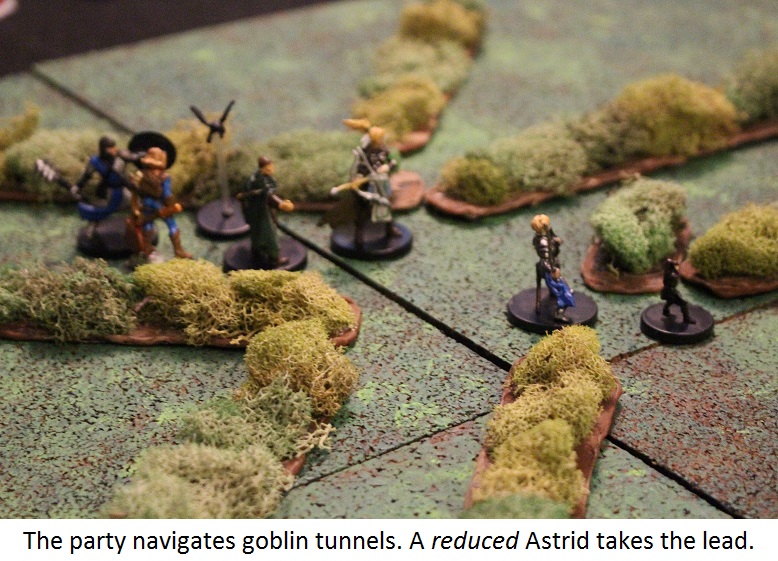 The goblin tunnels through the wood are low and narrow, forcing them to move stooped over. Shalelu is especially unhappy with this and looks distinctly uncomfortable and unsettle to be in such a confined space. They hear a strange, booming call echoing through the briars to their right, which the elf ranger identifies as a bunyip, a monster that’s sort of a combination of shark and seal. To their left, they can hear the sound of a large group of goblins talking and arguing.

The adventurers decide to draw the goblins towards the sound of the bunyip by using Amelia’s ghost sound spell to mimic dog barks. The trick works and the goblins rush past, intent on defeating the dogs to prove their worth to Chief Ripnugget. While Astrid keeps watch, the party investigates the goblins’ nesting area, finding little of interest.

Astrid, meanwhile, sees the goblins fan out searching for the dogs. Several goblins go off to fetch their own goblin dogs. The adventurers gather together to try to lure the goblins into a trap, but they make too much noise getting into position. As the goblins turn towards the sound of intruders, Astrid finds herself hiding alone in the shadows amongst a gaggle of goblins. Zavian steps forward to begin preaching the word of Abadar, enthralling most of the little monsters, though several resist the distraction and heckle him back that they prefer Nualia’s sermons.

The arrival of the goblin druid Gogmurt, however, complicates everything. He commands the briars to entangle the party, leaving the majority of them bunched up at the entrance to the chamber while Astrid and Lea stand out in the open. The entanglement also distracts Zavian from his preaching, breaking his enthrall spell.

Lea, recognizing that Gogmurt and the other goblins are from different tribes, sows enough dissension that the druid walks off in a huff, leaving the fight to the dozen goblin warriors. Most of them charge the paladin, while several goblin dog riders attempt to push Astrid into the hole. 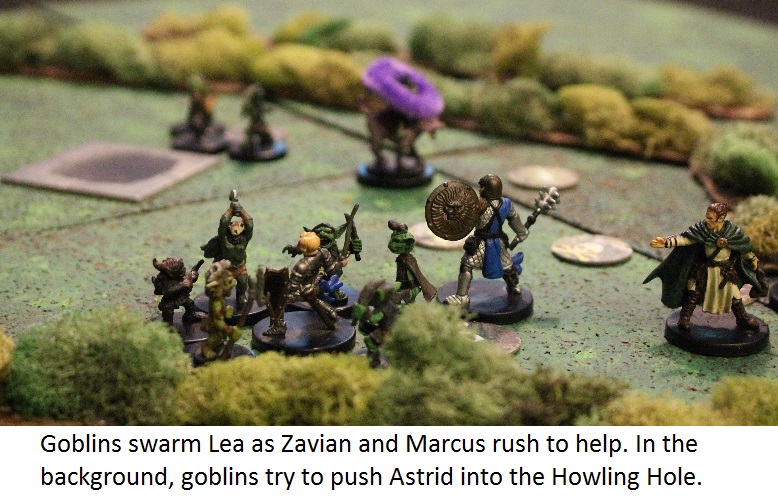 Shalelu thins the goblins’ numbers with her arrows, taking some pressure off of Lea. Zavian and Marcus, still hunched over to present a lower profile to goblin arrows, move forward to assist the paladin with morningstar and ranseur. Astrid, meanwhile, successfully resists the attempts to throw her in the hole, and instead it is one of the goblin dog riders who takes the tumble. Amelia attempts to put a band of goblins to sleep, but only manages to knock out a single rider.

One hammer fall at a time, Lea clears away the remaining goblins around her, calling up the Inheritor’s grace to sustain her from their dogslicers. As the threat of goblin arrows diminishes, Zavian and Marcus rise to their full height to finish off their foe. While the party mops up stragglers, Lea goes dashing after a riderless goblin dog, bringing it down with a well-thrown dagger.

However, the isolated paladin is vulnerable to ambush by Gogmurt. The druid’s firepelt cougar temperamentally refuses to assist, but even so the goblin is able to sear Lea badly with a burning scimitar. Zavian rushes to her aid, while Shaelu takes up a position with her bow. Wounded, Gogmurt attempts to retreat but is cut off. Near-death, the goblin druid begs for mercy.

The adventurers drag him back over to the howling hole, where he blurts out information on the political situation in the Thistletop goblin trip. Once a top adviser to Warchief Ripnugget, Gogmurt was pushed aside when the chieftain made an alliance with Nualia against the druid’s advice. Gogmurt believes that Ripnugget has become infatuated with Nualia, despite the fact that Gogmurt has seen the aasimar and Tsuto “going at it like donkey rats” in the Nettlewood.

Gogmurt also describes the three others Nualia brought to Thistletop—the bugbear Bruthazmus, a human man dressed in metal, and an angry dark-skinned woman who burns goblins that get in her way. Gogmurt asks the heroes to get rid of these interlopers. If they do, he can promise that his tribe will never bother Sandpoint again. The adventurers consider this offer, but Shalelu warns that goblins simply lack the attention spn to keep any promise they make.

The party then questions Gogmurt about the fort itself. The only entrance the goblins use is the bridge, which is trapped if more than three longshanks cross it at a time. The trap can be disabled at the opposite end of the bridge. However, Ripnugget has been warned that adventurers are in the area, and his guards aren’t likely to let anyone cross the bridge. The party decides to force Gogmurt to cross the bridge and disable the trap, threatening that Shalelu will shoot him if he tries anything funny. The goblin reluctantly moves out onto the bridge, where he is spotted by goblin lookouts and killed in a hail of arrows. The lookouts cheer at their victory.

With the sun starting to sink low on the horizon, the adventurers then work up a different plan. Shalelu will harry the goblins at the bridge entrance to keep them distracted. The party will set up a fake campsite in the hopes that this plus Shalelu will lure the goblins out for an attack. Meanwhile, the rest of the party will head down to the beach to summon up a swan boat and then circle around to the back of the island. There, Amelia will scale the cliffs and attack a grappling hook the rest of the party can use.

It is night by the time the adventurers reach the top of the island, the darkest helping to obscure their approach. They send Ash to inform Shalelu of their success and ask her to step up her attack in order to keep the goblins distracted. The elf ranger does so, and the party makes their way over the stockade wall into the fort’s courtyard. They kill some sleeping goblin dogs. They also find a strange outbuilding with a battered door the goblins appear to have hastily nailed shut. The two dead goblins lying in front, their heads crushed in, suggest that whatever is beyond the door is something the goblins don’t want to get out. They decide to leave the building alone for now. 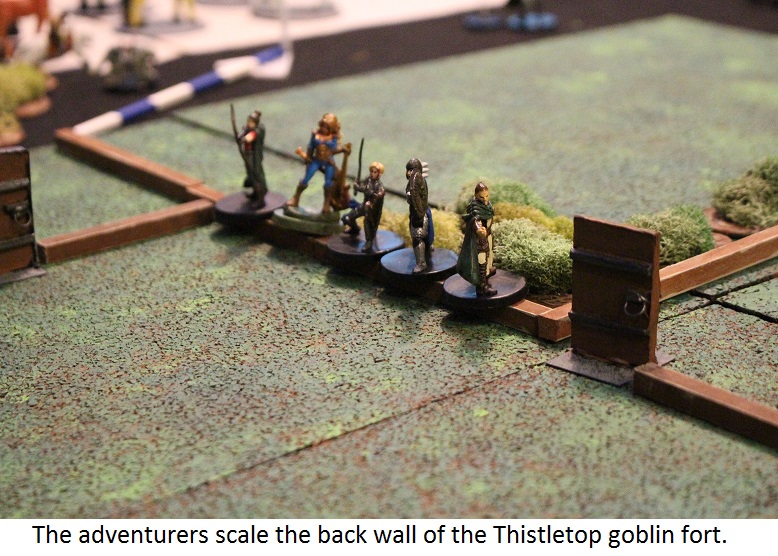 The party cautiously enters the wooden building to the north of the courtyard. Inside, they find an empty meeting room and what appears to be a latrine. Zavian recognizes that it isn’t up to code and couldn’t possibly function as a latrine for long. Investigating, Amelia and Astrid find a secret door that reveals a treasure chest with a huge padlock. Amelia disables a nasty trap on the chest and picks the lock. Inside they find a small treasure trove in goods and gear.

The last door they investigate is a set of stone stairs leading down into the dark. The adventurers decide to press deeper into the ruins below, where they expect to find Nualia and her followers.