The Rune Wardens arrive at Foxglove Manor, a crooked, sagging building that looks as if it wants to hurl itself off the seaside cliff on which it is perched. A short distance from the manor is the burned out shell of another building, near a large crumbling well. As the adventurers pass by the ruins, a couple sickly-looking ravens clumsily fly off. Otherwise, the landscape around the manor is devoid of anything other than twisted nettles and other weeds.

The party marches up to the front door and Zavian peers inside the grime-encrusted windows. He spies a hulking feline shape crouched down in the central foyer and warns the others. Amelia attempts to pick the lock on the door, but her fumbling only makes it worse—especially after Dace reminds her that they retrieved the groundskeeper’s key back at the Hambley Farm.

Lea batters down the door to reveal a room lined with moldering trophies of boars, bears, stags, and other creatures. The centerpiece is a monster that Marcus recognizes as one of the fabled manticores. Intrigued, he walks inside to inspect it and catches whiff of burning flesh. 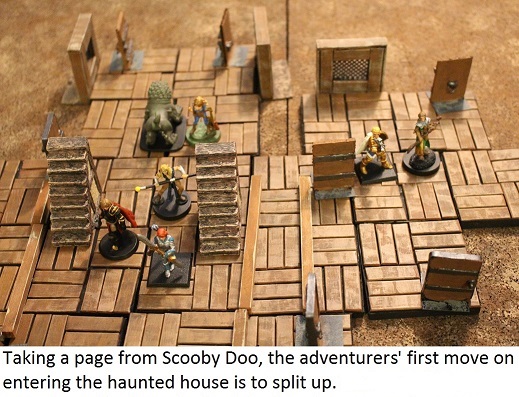 Seeing no immediate danger, the adventurers begin to fan out inside the first floor of the house. Zavian and Marcus follow a side door to a dance hall with a ruined piano. When Marcus touches the keys, he is swept into a vision of dancing with a beautiful Varisian woman whose throat bruises and skin rots away in his arms. He emerges from the vision worn and fatigued. Zavian destroys the piano, while Lea suspects that Marcus is exaggerating the experience.

Elsewhere, Amelia and Astrid notice a strange moldy stain half-hidden by a throw rug. Peeling the rug back, Amelia sees that the stain is in the shape of a spiral staircase leading down—a staircase made of hundred of tiny bones.

As Marcus passes back through the foyer, the smell of burning flesh returns and the manticore appears to burst into flames. Now bearing a woman’s face, it lunges at him, singeing the wizard. Lea witnesses the attack and the party now proceeds more cautiously.

Beyond the trophy room is a dining area with what would have been a beautiful view of the Lost Coast, which is spoiled by three floor to ceiling stained glass windows depicting a treant, a roc, a kraken, and a sphinx, all being drawn into a smoking, seven-sided box.

Lea investigates the adjacent library, accompanied by a wary Marcus. The paladin spies evidence of a struggle: a knocked over chair, a loose scarf, and a bloodstained, heavy bookend. The scarf flickers to life as Lea inspects it, leaping from her hands to start strangling Marcus. The wizard is afflicted with another vision, this time of Aldern Foxglove strangling him with the scarf. After a moment, the cloth falls to the floor inert.

The party continues to explore the first floor. They avoid a room where the dust on the floor is mysteriously stirring. Zavian discovers a diseased rat in a bath tub, and kills it. Finding little else of interest, they decide to head upstairs.

There, they come across a gallery full of portraits of several generations of Foxgloves. The room quickly goes cold, however, and the various portraits quickly change to depict their subjects in various forms of death (except for Aldern’s two sisters). The portrait of Vorel Foxglove erupts with fungus that sweeps across the room before vanishing a moment later.

Elsewhere, the party comes across a portrait that was turned to face the wall, depicting a Varisian woman named Iesha Foxglove. Looking at the portrait, Astrid is suddenly filled with hatred of other women and rounds on Lea, but the rage fades a moment later.

The adventurers continue up to the third floor, where they overhear a woman sobbing. They rush towards the noise and burst in on an attic loft where the undead Iesha is paralyzed with horror in front of a reflection of herself. She ignores their inquiries and they decide to block her few of the mirror. This frees her from her reverie, and she loudly swears vengeance on Aldern before charging past the party.

The Rune Wardens race after her as she descends to the ground floor, reveals the spiral stain on the floor, and then tears open the floor with her bare hands. She leaps into the darkness and the adventurers follow.

They land in a tiled basement, where a huge hole has been hacked in the floor. Amelia has a vision of Aldern chipping away at the floor with a pick axe, muttering “For you. All for you.”

The hole has revealed a set of stairs carved into the bedrock, leading down to a cave complex. As the adventurers struggle to keep up with Iesha’s revenant, they are set upon by a pack of ghouls. The ghouls manage to slow them down, but can’t defeat the party.

The cave complex opens onto a large, funnel shaped chamber that slopes down into a chasm that drops 50 feet to the sea below. At the far end of the chamber is a reinforced door which Iesha is pounding on, but reaching her across the slick, slanted stone could be difficult.

Zavian flies across to affix a guide rope for the others, but is set upon by a band of goblin ghasts who were lurking on the ceiling. Zavian manages to slip away from them, swooping back to the rest of the party to grab Lea and then carries her over to the ghasts. Lea calls upon Iomedae’s grace to sear the undead.

The adventurers slowly thin out the ghasts’ ranks. Marcus slips trying to move closer, but is grabbed by Zavian with his free hand. Lea hurls the last of the goblin ghasts into the chasm.

The party regroups in time for Iesha to burst through the door into the room beyond. Aldern, now transformed into a powerful ghoul, awaits them. He falls to his knees and begs for forgiveness as his wife approaches, but she isn’t having it.

As the two undead Foxgloves begin to spar, the adventurers rush to join in. Astrid charges forward, followed by Lea. Zavian, meanwhile, spies a disturbing human outline in the cancerous fungus growing on the far wall. He has a sudden vision of Vorel Foxglove drinking a potion in triumph only to be wracked with pain and collapse into a mass of fungal tumors.

Aldern, having dubbed himself the Skinsaw Man, puts on a mask made of human flesh and takes the appearance of Amelia. Marcus casts enlarge person on himself, hoping to reach over the battle. Iesha ultimately seizes hold of the ghoul lord and Astrid drives her sword through his head.

After Aldern dies for a second time, Iesha begins to fade fast. The party questions her, learning that Aldern killed her in a fit of jealousy while she was chatting with a carpenter. She asks that they take her body from the cursed house. She blames the curse on the human shape in the fungus.

Investigating the infestation, the adventurers conclude it will take powerful divine magic to permanently cleanse the house of the necromantic taint, the last residue of Vorel Foxglove’s failed ascent to lichdom. Lea intends to reach out to contacts in Korvosa to get the job done. In the meantime, Marcus hits the fungal figure with burning hands.

Searching the room, they find Aldern’s obsessive collection of disturbing drawings of Amelia, as well as small personal effects stolen from her. Mixed in with the mess is a letter from Xanesha, “Mistress of the Seven,” instructing Aldern on the Sihedron ritual to perform on a select list of victims. The letter is addressed to Aldern’s Magnimar townhouse.

Carrying Iesha’s body with them, the party loots the remaining unexplored rooms of the house and then exits into the dusk. Outside, they discover that hundreds, perhaps thousands of sickly-looking ravens have perched on the ruined out building, their eyes fixed on the party.

Marcus is pretty sure none of them are Ash.