Elszevina was a powerful archon in service to the goddess Sarenrae, and was beloved by Zavian in his past life as a fellow celestial. Elszevina ultimately sacrificed herself to free Zavian from an infernal contract he had entered into in order to gain the power to save her and their fellow Dawn Heralds from an army of demons.

In the present day, the aasimar Zavian has dedicated himself to undoing his past wrongs and freeing Elszevina from her contract with the fiend Belawara. He has managed to obtain and destroy both copies of the infernal contract.

But upon encountering Elszevina in the spires of Xin-Shalast, he has learned that she spent three centuries of infernal servitude in the Outer Planes. She appeared to be thoroughly corrupted by the experience, with an intense hatred towards him.

However, he remained committed to drawing her back to the light. Zavian talked her out of attacking him and persuaded her not to take vengeance against Belawara, but instead seek out her lost testament from the Book of Light and Truth. She has left to follow this quest, and Zavian has urged her to reach out to her old friends Ilmiring and Maliek. 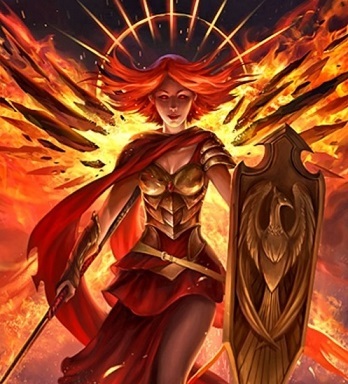