Khalib was Karzoug’s chief apprentice, awakened after ten thousand years of slumber. He was one of the Runelord’s top lieutenants in Xin-Shalast. He maintained quarters in the Pinnacle of Avarice among the Spires on Mhar Massif, and was rarely seen outside the complex.

Khalib was known to bind and bargain with fiends, including several in his direct service in the Pinnacle. He hired the ice devil Gamigin to assassinate the Rune Wardens. And Zavian learned that he had Elszevina in his service in the Spires.

The party encountered Khalib in the Pinnacle of Avarice, where Marcus’ raven familiar Ash paralyzed him with a ghoul touch spell. The bird then used the smite granted to it by Lea to coup de grace the First Apprentice. 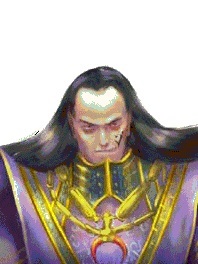