A young cleric of Abadar

- Zavian had an initiate sense for the flow of gold. He felt disruptions to the gold stream in a way that others could not. Especially when it involved his family. Thus, it came as no surprise that he was eventually recruited to become a Cleric of Abadar.
- During the great Magnimarian Recession, the Disante and Leonte families were hit hard. Zavian used his Aasimar heritage to draw in crowds.
- Contrary to the stoic person he is now, in the past, he was known as the King of Lowcleft and his queen was the once innocent and proper, Julia Leonte. Adventures and all sorts flocked to party with the Aasimar.
- Zavian ultimately grew tired of it all, it was fun while it lasted, but he had always felt the call of something greater. His revelation came when an adventurer spat at him (likely Keris), telling him that he knew nothing of the greater world beyond Magnimar. Zavian, made his decision to leave.
- With Julia, he could have had everything. A loving girl, money, sex, drugs, and hardcore bard music (aka rock & roll), but he had only used his Aasimar heritage to help his family. The true Zavian had grown bored. His greatest joy had come from hunting down criminals and giving them the golden bolt

Encounters with Sarenrae:
(1) In the tunnels below the Foxglove Manor, Zavian was nearly hard hit by a fire attack, but unbeknownst to him, the Sarenrae energies that still course within him were strong enough to ward off the attack. (Actually Gareth played a card)
(2) Zavian has always had an interest in watching the dawn of day, bathing in the sun’s warmth. He previously looked into the religion of Sarenrae, but felt that its good nature did not match well with his own.
(3)

The Relationship between Maxzavian and Elszevina:
(1) They were battlefield comrades and serve complementary roles. Zavian was the support spellcaster and Elszevina the Swift was the quick strike fighter.
(2) They had a master-student relationship.
(“Each archon begins life as a lantern archon or lesser servitor spirit, gaining in power and prestige through aiding the cause of good. Watched over by benevolent mentors and captains of the divine orders”)
(3) Maxzavian was a researcher. He wasn’t expected to do well in battle, but he still played a vital role in crafting spells (like Vivicarnum)

How Zavian Learns of His past:
(1) Sarenrae’s holy text, the Birth of Light and Truth, has a special section for the individual owner to record their own stories of heroism and greatness. Zavian somehow finds his own original text and learns of his past exploits.
(“Most copies contain extra pages for the owner to record uplifting stories he experiences or hears in order to repeat them to others”)
(2) An old comrade from the Dawn Bringers that is also a hound archon confronts Zavian. The hound archon takes the form of a seemingly normal dog that follows Zavian around.
(3) Zavian has dreams of that fateful night that haunt him. Helszevina, perhaps due to her lingering love for Zavian or to antagonize, calls to Zavian from beyond. Although he interprets it as dreams and nightmares.
(4) Maxzavian knew that may forget his memory and asked an old trumpet archon friend to deliver a message to his new self as Zavian when the time came.

Zavian’s and His Angelic Patron:
(1) Zavian worships Sarenrae.
(2) Zavian decides he wants freedom and to find his own path, he decides to worship Desna.
(3)Zavian serves an Empyreal Lord that is a close ally of Sarenrae and thus serves Sarenrae indirectly.

Consequences of Breaking away from Abadar:
(1) One of Zavian’s favored items breaks, but is eventually replaced by one given by the new deity (such as Metal Wings +3)
(2) Zavian’s Cleric profession check, which generates weekly gold, ironically earns him lawsuits that loss him gold.
(3) The Bank of Abadar seizes all his gold.

Battles and Confrontations:
(1) Zavian fights with his old comrades.
(2) Zavian fights with a zealous paladin of Sarenrae from the Cult of the Dawn Flower (“There are no second chances in the desert…These hard-edged priests offer mercy once and only once to their opponents, and if refused, they are ruthless in battle, ignoring offers to parley or surrender, and unafraid to judge neutral opponents as if they were black-hearted evildoers.”)
(3) Zavian fights a mercenary hired by the contract devil
(4) Zavian fights with the Contract Devil
(5) Zavian confronts Helszevina
Other Ideas:
(2) Zavian becomes an agent on varisa since angels have a harder time coming down to earth.

Concept: Vivicarnum is a good aligned version of the animate dead spell that use the same mechanics for determining HD control and creation. However, instead of animating dead bodies into undead slaves, this spell animates a construct called a “vivicar” that is a good aligned version of the target creature. Vivicar constructs are imbued with the ‘good’ qualities of the target creature’s will and personality that align most closely with the ‘cause’ of the adventurers. In this regard, vivicars should be seen more as individuals volunteering to join the adventurer’s cause rather than as mindless servants.

However, because of the difficulties associated with attempting to bring out the inner good of certain evil creatures (such as devils or ardent killers), the GM may ascribe if Vivicarnum can work at all or if a will save is appropriate. The will save should take into account things such as the creature’s past good deeds or a hidden desire to protect its loved ones.

Vivicarnum generally requires the target creature to be dead because the inner-light and good emotions that the spell attempts to preserve are often not strong enough until roused by the creature in its final moments. However, these positive emotions could also have been stirred by traumatic events as well.

Spell Components: Vivicarnium uses aasimar angelic blood and requires the caster to cast a modified blood bibliography to create a scroll to be placed in a miniature figurine. The scroll contains the inscribed ‘good’ animus of target creature and once the scroll is placed into the miniature it enlarges, taking on the characteristics and form of the target creature. (based off the golem of prague)

Origins:
As Abadar built the Lawgiver, so too did Zavian build his blood construct.
Zavian, as a Cleric, desires to attune others to the will of his God’s. He also enjoys the idea of having others that will fight for him.
Zavian recognized that animating the dead would cause conflict amongst the Ruin Wardens (specifically Lea). Therefore, he sought out an alternative.
Variant versions of these constructs generally require the input of craftsmen (such as Marcus), which drives the exchange of gold as is Abadar’s will. 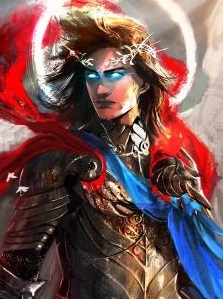